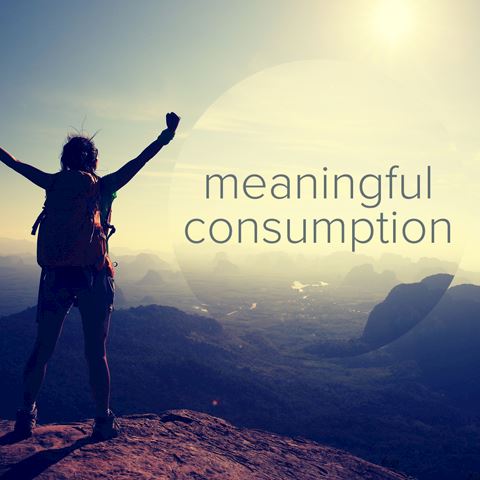 Waking up to meaningful consumption

When we attended the Worldwide Partners meeting at the end of last year, there were two key trends influencing brand communications that everyone wanted to talk about – 'woke' and 'meaningful consumption'.

Campaigners and social activists have been telling us for years that we can use our purchasing decisions to shape the world we want to live in. And the message is finally getting through, particularly to millennials and Gen Z.

Awareness of these trends is not just important in consumer-world. It’s well understood that B2B brands need to engage with their customers as real people, and with the workplace purchasing decision being increasingly made and influenced by millennials, this is no time to play it safe. As Forbes explains, “B2B brands that make emotional connections with customers have double the impact of marketing conveying functional value”.

Today's B2B and B2C consumers are waking up to the fact that they have a voice and that they can use social media to put pressure on a company to behave in a more environmentally or socially responsible way. When these consumers make a purchase, they want that purchase to reflect their values, to help them feel good about themselves and to know that, even if it's only in a small way, they are helping to make the world a better place. For some, meaningful consumption extends only to a few items, for example the coffee they drink or chocolate they eat. For others, it encompasses pretty much everything that they buy, from their clothes and holidays to the investments they make and energy they use in their home.

How brands are responding

Not surprisingly, brands are tapping into this growing 'woke' mood, aware that if consumers are using ethical values to drive their purchasing decisions, then they need to make sure that their business performs well in this area. Companies large and small are therefore asking themselves 'How can we be more meaningful? How can we impact change without coming across as cynical, patronising or exploitative?'

The risks of capitalising on a crisis

This, of course, is the big risk that brands face – that in seeking to commercialise environmental, social and political movements for profit, they antagonise the very consumers they are seeking to attract. The uproar that greeted Gillette's 'The Best Men Can Be' campaign is a good example of the fine line brands need to tread if they are to avoid accusations of 'woke washing' – adopting the veneer of progressive values simply to protect their bottom line. Although many have praised the campaign for the way it challenges men to be better and less macho, others have threatened boycotts. One industry magazine went so far as to call the campaign 'the year’s worst marketing move'.

Other attempts by brands to take on social and political issues have proved similarly divisive. For example, Nike developed a campaign featuring Colin Kaepernick – the former San Francisco 49ers quarterback who sparked national debate by kneeling during the national anthem to draw attention to police killings of African Americans. The campaign’s strapline 'Believe in something, even if it means sacrificing everything' led to people posting videos on social media showing their Nike shoes burning and Nike socks with the “swoosh” symbol cut out.

The importance of being genuine

But other brands have succeeded in adopting a more 'woke' approach that finds favour with consumers. For example, Patagonia's donation in 2016 of all its Black Friday profits to environmental groups working to combat climate change built on an ongoing pledge since 1985 to donate 1% of all sales to these groups. Its one-off donation of Black Friday profits therefore came across as genuine and meaningful.

Increased consumer expectations around ethical assurance are clearly not going to go away and all brands need to decide how they are going to provide this assurance. Campaigns that exploit key societal themes like #MeToo may grab headlines in the short term and there are always those that argue that all publicity is good publicity. But we suggest that a more thoughtful, genuine approach based on a deep understanding of what your brand really stands for is more likely to build the long-term trusting relationships that every business seeks.

Interested in starting a conversation about how your brand can become more meaningful? Email Rachel Arquati

Sign up for industry updates straight to your inbox

Back to all news & views here

Other most recent stories

Are you an energetic ambitious executive or manager, full of ideas, good with copywriting, great with people and supremely organised? So how about becoming part of our award-winning team working with some big brand accounts?

There are many different ways to become a thought leader within your field. Everything from video, and podcasting to your more traditional articles and speaking events can be utilised in order to elevate your position among your professional peers.

Managing stakeholders is hard. Anyone who tells you otherwise is selling something.